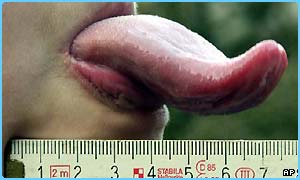 Coming home from the pub on a Friday night, one week in 1994, it's hard to put into words how much this woman fried my brain.

Sheila Chandra was appearing on Later With Jools Holland (with, I imagine, Ocean Colour Scene...they were ALWAYS on) as the token world music act. She stood alone in the spotlight and for 3 minutes did nothing but make weird noises with her mouth that were somewhere between a human impersonation of a tabla and the triple-tonguing exercises my old brass teacher used to insist we all did.

I bought her album "The Zen Kiss" and found that there were two versions of the Speaking In Tongues track, Parts III & IV (the first two parts were on the previous album "Weaving My Ancestor's Voices") along with some other less interesting synth-based wailing. I wish she'd stuck more to the tongue-based stuff..

Alas in researching her all these years later for the purposes of BLOG - it seems she had a track featured in the Lord Of The Rings so there are probably internet geek sites all over the shop debating her relevance to Frodo & that elf shit, but the goblin-lovers can forget it - I heard her first!
Posted by Francis at 7:44 pm 4 comments