The BNP Can Suck My Fat One

Strange times in the wake of last week's elections. I never thought I'd see far-right parties winning seats in my lifetime, and that xenophobia was the hallmark of my grandparents generation.

People talk about the 1970's as being the decade of casual racism (Alf Garnett, Black & White Minstrels, It Ain't Half Hot Mum & Mind Your Language - can anyone look back at those without feeling a twinge of embarassment?) and I remembered listening to one of my parents records when I was a little kid... 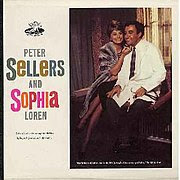 On the face of it - a story about a lady complaining to her Indian Doctor that she couldn't work out why her heart was fluttering and her pulse was racing. Of course it turns out that her secret love for the Doctor in question is the CAUSE of her heart problems...beautiful and funny. Except I didn't realise at the time that the Doctor wasn't really Indian...the ten year old me just thought it was a touching story of inter-racial love. And CHRIST Sophia Loren sounded sexy...

Then bizarrely another record that I thought was about inter-racial love actually wasn't. I thought he was in love with a "little white girl" - turns out that he was singing "Little White Dove" and she was just from another tribe, so I suppose I wasn't a million miles away.

Did I really grow up in such a cauldron of multi-culturalism and tolerance? Maybe I did..I certainly never understood why my Grandma would grip her handbag like vice whenever she saw anyone even vaguely afro-carribbean in the street (which wasn't often in Matlock) 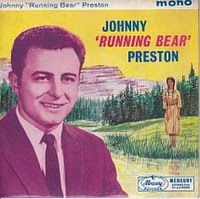 Anyway this one was a favourite of my Dad's Running Bear by Johnny Preston. I absolutely loved it - although I don't think I ever quite got the whole death pact thing at the end. I probably imagined that when he sang "Now they'll always be together.." that they swam off into the sunset. My favourite bit though was always the tempo-changes on the chorus that still see me bobbing my head 30 years later..

So yeah - let's just embrace our differences and love each other because...

I've a few more new posts in the pipeline here too, so watch this space
Posted by Francis at 9:12 am 0 comments