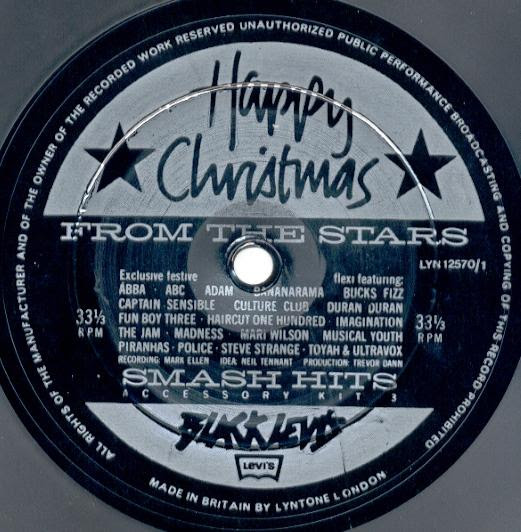 Childhood memories of Christmas aren't complete without this ridiculous flexidisc that came free with Smash Hits magazine in December 1982. That's not really 29 years ago is it?

Neil Tennant is credited with the idea, Mark Ellen narrates, and the whole thing is produced by backroom radio legend Trevor Dann.

It's basically a string of brief christmas messages from popstars of the day, strung together to make it sound like they're all at the Smash Hits party (apart from The Police - who are "on a desert island" for some reason).

Oh and a few adverts for Black Levi's (the sponsors) which we found hilarious at the time and even now I can't see a pair black jeans without saying "black leeevi's" in my head.

Not deliberate but I seem to have posted yet another flexidisc...hmm. Can i keep this up?
Posted by Francis at 2:12 pm 0 comments