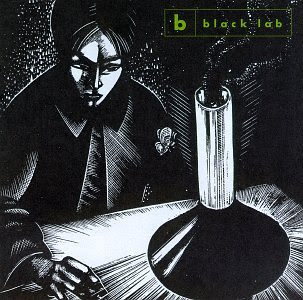 On the same tape as the Joe Henry album I talked about here were a couple of other artists I didn't know and one of them was Black Lab.

Just this one song - which I come back to quite frequently as I love it so much. (sad to say that when I checked out the rest of the album it wasn't so hot)

It's another one of those reminiscing about lost love songs and my interpretation is that it's about a bloke who sees an ex-girlfriend at the airport, looking happy as she heads off on her travels, and coming to the conclusion that "she is much better without me".

My favourite line is

"some people change, others hang on 'til they can't anymore"

The one thing that makes the track stand out beyond all others though is the fantastic one-note guitar solo at around the 3 minute mark. There aren't many one-note guitar solos, in fact not enough, but this one really excels as it tortures the life out of that single note (OK it's probably got more than one note in it but not many more). I had it in my head that this was played by Greg Lisher of Camper Van Beethoven but I can't find any evidence on the internet to back that up. I'm probably wrong then.

Black Lab - Gates Of The Country
Posted by Francis at 6:00 am