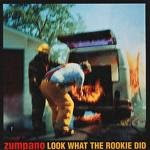 Another one of those records that dates back to the Music Avalanche - I don't actually remember why I bought the Zumpano album "Look What The Rookie Did", as I'm pretty sure I'd not heard them. So a blind (or should that be deaf?) purchase with only the Sup Pop label as any promise of quality, meaning I was expecting something heavy and thus disappointed.

It quickly grew on me though, a sort of baroque pop album not a million miles from Ben Folds. This record has some serious bounce. They did one more album and then split up.

I didn't realise until recently that the singer was AC Newman from The New Pornographers, but I maintain that this album is better than any of those from the Pitchfork Pant-Wetter's favourites.

Zumpano - I Dig You
Zumpano - Rosecrans Boulevard
Posted by Francis at 6:00 am

Email ThisBlogThis!Share to TwitterShare to FacebookShare to Pinterest
Labels: Zumpano

I'm with you for Zumpano better than New Pornographers.
Thanks for the souvenirs.

The Dig Me Out podcast reviews 90s albums like Look What The Rookie Did by Zumpano, check it out at http://digmeoutpodcast.blogspot.com/